It is funny how fate, karma or plain good luck comes into things I attempt. My wife says that this has to do with putting these good vibrations out into the universe, and it is repaid with good fortune. I’d rather be lucky than good.

I have in my covetous possession a large, cast cellular blank. The cells are truncated cones some 2″ in diameter tapering to 1 5/8″ at the bottom, arranged in a hexagonal array, there are six kidney-bean shaped holes at the edge which go into the glass which form part of the structure. All in all, there are no parts of the glass thicker than 3/4″ thick. The white marks on the back are the remains of the parting compound to keep the glass from sticking to the mold. The company that made it, EmbeddedRF, made 10 or less to test out their procedures before moving on to larger ones. They were sold some company in 2004. I found this one on Ebay for $350.

It has some small defects, 2 cracks in the rear next to some of the small pockets at the edge, and around a dozen hemispherical bubbles that didn’t quite level out on the surface. The bubbles are more serious, as the larger ones are around 3/16″ across, and may not fully grind out. There is around 3/4″ of glass at the surface, and this may be thick enough to get those bubbles out. Even if it isn’t, a few small defects like this would not affect the image in any serious way.

Additional, the insides of the various cells in the rear of the blank had a number glass “bubbles” adhered to them. I looked at them in dismay, knowing I couldn’t grind the insides smooth with them in there. I thought about it for a bit, and looking at a carbide-tipped scribe (Lee Valley Tools, thank you) I used this with a wood block to chip some 50 or 60 or these out. All were removed without serious incident. The bottoms were mostly flat or had a slight concave depression in them. I made a wood tool to match the conical holes and covered it with a mix of silicon carbide and epoxy. It cleaned the bottoms well enough but the sides were still somewhat rough. I may have to have a diamond tool made for this if I want to improve the situation.

I have also been lapping the back flat. I used a mix of 46 and 70 grit from a lapidary shop to start with. It left a pretty rough finish, so I changed to 80 grit. This worked better, but left most of the holes with small chips around their edges, somewhat spoiling the smooth look I had envisioned for it. I used a 220 grit water stone from my woodworking tools to level it further. I used so much of this stone, it is now less than 3/8″ thick, after starting at 1 “. I infilled the bottoms of the holes with sawdust and topped them with plaster of paris, giving some support to the edges to get a smooth finish. This is a technique I thought of some while ago, but wondered if it was smart. As it happens, the people who ground the 200” Hale telescope mirror did exactly the same thing when then prepared their blank for work, as detailed in the book, “The Perfect Machine”. I have built a tool to grind out the holes also, and you can see the results of that work. My guess is it will take about another 10 hours of work to finish this part.

The blank seems to grind slowly compared to other Pyrex I have worked, and its appearance is white without the usual yellow cast of Pyrex or faint green of plate glass. Internally, it lacks the characteristic ‘swirls’ that come from the molding process used on typical cast Pyrex blanks. There is a faint web-like pattern similar to what occurred when GE attempted to make fused silica blanks in the 1930’s. I did save some small pieces that clung to the inside of some of the rear depressions in case I want to test the glass.

I also want to edge the blank properly, and would like to borrow a potters wheel, which is normally used in wet conditions. I have a diamond lapping plate of 1000 grit, which I will use as a final step. I might need to buy a large 200 grit diamond stone, otherwise it will take a very long time.

My plans were to make either a 16.5″ f/4.5 Newtonian or a 16.5″  f/8.3 Ritchey/Crietien. The latter is a more complex instrument to be sure, and with the blank being cellular, perforating the blank may be impossible or next to it, so I have made tenitive plans for it to have a Coude focus. Since I have a 12 1/2″ full-thickness blank, I’ll use the smaller for a Dobsonian.

I have played around with the optics on a program called ATMOS. The conclusion is that to get an f/8.33 telescope, you need to make an f/2.75 or so primary (very fast, very deep) and a 5″ secondary, leaving you with a central obstruction of around 32%. My big Maksutov has a CO that big and I find its contrast pretty good. With the Coude focus I will need to find a way to

Keeping the weight of the scope down will be problematic, as I will have to work hard in all areas to do this:

The main tube will need to be a truss type, with aluminum front and rear plates connected with carbon fiber tubing. The rear cell will be an open frame CNC’ed out of a plate of aluminum with an attached plate at right angles to hold the focus as there will be a tertiary mirror to direct the light path from the secondary mirror outside the truss.

I am taking interest in this project again. I now have a mat on tiles cut for a 16″ tile tool, and more grit, polish and pitch for use. Astromart is great for finding these things.

I have now plastered over the holes but I partly filled them with sawdust! instead, seeing as how my woodworking area is filled with it. In the interests of not making extra work for myself, I plan on grinding the back of the mirror as I change grits.

This was taken some time ago, and you can see the back has been flattened most of the way across with some edge pockets left behind. I plan to continue grinding at an angle with a diamond stone to get a more uniform look.

It is strange looking, but lookslike a prototype of the ones made by Dream Cellular. This one is a more simple design, with a thicker front to allow deeper ratios. It has a cast f/5 curve already and that would save time for whoever starts grinding.

All projects stalled over the winter due my being diagnosed with Type One Diabetes. Things are returning to normal, whatever that will be remains to be seen

Another ATM had a second blank like this for sale for $450 plus $40 shipping and ten a gouge by Canada Customs for $112 Ouch, bastards. Et Tu Brute?

He got as far as starting to polish it before putting it aside. he did jst as I had and ground the back flat first and did a nice job. It has its native curve of f/5 still so it will need a step to make into a Dobsonian. This is a dilemma. It has a few small marks made during polishing, which may not come out with more polishing. I could make a tile tool to regrind, but then I would want to go deeper to say a f/4.3 c urve to make this useable without a step or ladder. 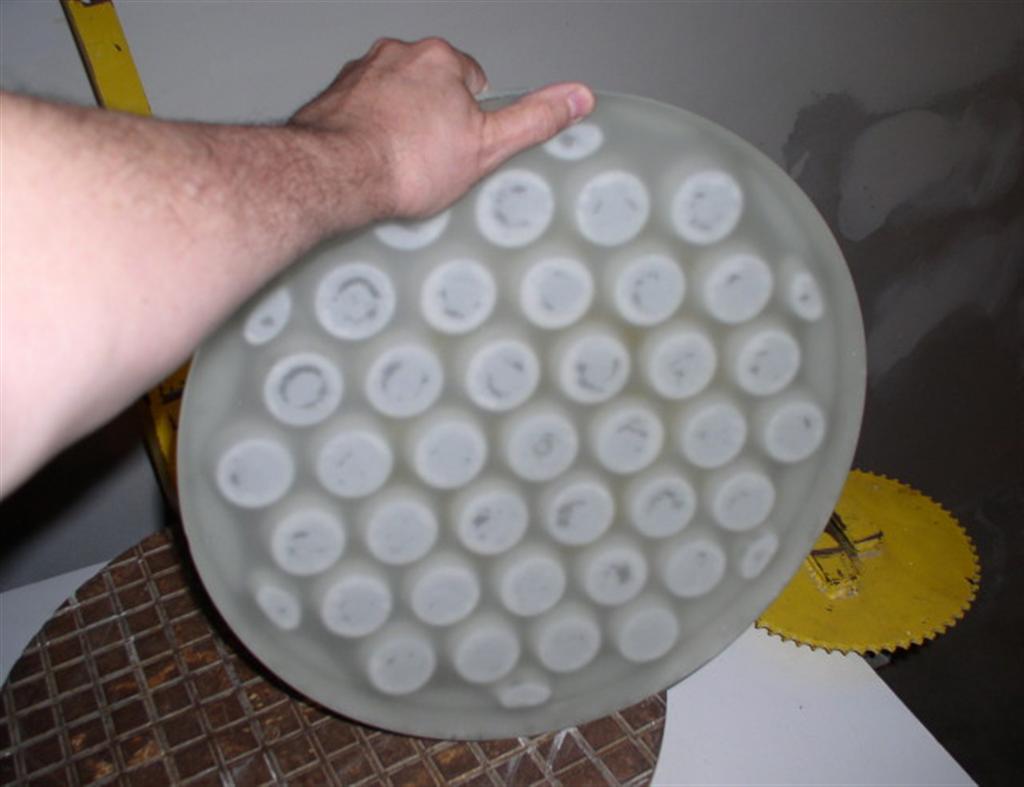 The polish on the surface does look slightly off, like it still has an incomplete polish in the surface. My 12.5 inch mirror shows a much better and clearer look to it.