The Observatory is located on the Burnaby Campus of Simon Fraser University.  The Observatory is situated at the east end of campus near Strand Hall. It features a six-meter-diameter dome housing a 0.7-metre diameter reflector telescope that is capable of tracking distant galaxies billions of years old.

The viewing plaza adjacent to the Observatory offers a sundial, space for people to set up their own telescopes next to the dome, and an outdoor gallery featuring illuminated seasonal star charts.

The Vancouver Centre of the Royal Astronomical Society of Canada (RASC) provides critical support to the Trottier Observatory and the Starry Nights @ SFU public outreach program. We partner with SFU for public outreach events.  Our dedicated and experienced volunteers bring their personal equipment to star parties at SFU and share with the public their knowledge of astronomy.

Members of the RASC Vancouver can become part of the Observatory team.  Following a period of training on the operations of the telescope, RASC Vancouver members can assist at public observing events as well as do their own research and/or astrophotography.

For more information, go to http://www.sfu.ca/science/trottierobservatory.html or contact your Centre President at [email protected]. 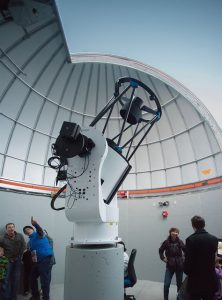 The telescope is the PlaneWave Instruments CDK700. It has a 0.7m aperture, and at f/6.5 has a comparatively wide field of view of about 0.5 degrees (the apparent angular diameter of the full Moon), when used either visually (with our widest angle eyepiece) or with the imaging camera. Technical information on the telescope design can be found at PlaneWave.

The telescope has an alt-azimuth mount and two observation ports. The main imaging camera is installed at one port which has a built-in field de-rotator, and an integrated guiding camera. The other port has a “periscope” that is used for visual observation, and also for interfacing with other equipment, including the spectrographs.

The observatory has two astronomical imaging cameras and two spectrographs, which are described next, followed by some information on the software that controls the various systems.

The main camera is intended for deep-sky imaging (galaxies, star clusters, nebulae): it is the Finger Lake Instruments ProLine PL16803, with a 16 Megapixel-chip having 9 micron pixels. The image scale is 0.4 arc-seconds/pixel, and the camera field of view is about 25 arc-minutes. There is an externally-mounted filter wheel with a complete set of broad- and narrow-band filters.

There is also have a high frame-rate camera that is suited to planetary “lucky” imaging. It is the ZWO ASI174MC colour-one shot camera.

The observatory has an echelle spectrograph, designed primarily for high-resolution measurements of stars brighter than about 7th magnitude, and a lower resolution slit spectrometer suitable for fainter diffuse objects.

The software that controls the telescope and integrates control of the dome, also serves as a powerful “planetarium” interface, and is called TheSky X, by Software Bisque.
The deep-sky camera is controlled by a sophisticated program that integrates auto-guider control, and interfaces directly with TheSky X: it is called MaxIm DL, by a Canadian company called Diffraction Limited.