Comet Neowise is receding from us but the Earth is about to plow through the debris field left behind by the comet 109P/Swift-Tuttle. We’ll see this as the Perseid Meteor shower where dust to pea-size bits of comet material impact the atmosphere and burn up in a trail of glowing ionized gas.

This annual meteor shower occurs over several days, every year, in mid-August. This year, the peak rate is predicted to occur on the night of Tuesday, August 11th at 11:00 pm PDT but Perseid meteors will be active for several days surrounding the peak.

Comet Swift-Tuttle is a periodic comet that makes a return trip close to the Sun and Earth every 133 years. It comes a little inside Earth’s orbit at its perihelion before heading back out past Pluto. It has a long history of observations with probable sightings as early as 322 BC and 69 BC. In 188, Chinese records suggest it reached naked-eye 0.1  magnitude. Its last close approach was in 1992 when it was visible with binoculars. The next return trip is not until 2126 when it could again be a bright naked-eye comet at 0.7 magnitude.

Perseid meteors can appear anywhere in the sky but they all seem to originate from a fixed point, called the radiant,  near the star Eta Persei in the constellation Perseus – the Hero.  From a dark site, you may be able to see as many as 110 meteors per hour. Note that the Moon rises just after midnight, at 12:05 AM, on August 12th and the moonlight will wash out faint meteors during early morning observing. No special equipment is needed to see the meteors – just lie back in a lawn chair or on the ground and look up and perhaps count how many you see.

The MacMillan Space Centre is hosting a Perseid Meteor Shower celebration on Wednesday, August 12th. The in-person star party is sold-out but you can still register to watch a live stream (by donation) – visit the Space Centre’s event info page to register and for more information.

See our post on How to Find Comet Neowise for a chart and other tips.

Three missions to Mars are getting ready to launch in the next few weeks. Why are all these missions launching at the same time?

They are all timed to match the upcoming Mars opposition on October 13th, 2020. When Mars is at opposition, Mars and the Sun are on opposite sides of the Earth. At opposition, Mars is also at its closest point to the Earth, making it more fuel-efficient for a spacecraft to reach the red planet.

Missions to Mars are often designed to follow a Hohmann transfer orbit to move a spacecraft from a lower circular orbit to a higher circular orbit using the least amount of fuel. A Hohmann transfer orbit involves an initial burn to push the spacecraft into an elliptical orbit, coasting most of the way to the higher orbit, then a second burn to put it into a circular orbit. To meet up with Mars, the transfer orbit also needs to be timed so that the spacecraft reaches the higher orbit at the same time that Mars is there – this timing requirement leads to launch windows that occur a few months before each opposition of Mars. The Mars Insight spacecraft (https://mars.nasa.gov/insight/) launched in May 2018, with the trajectory below, was timed to match up with Mars’ last opposition in July 2018.

Oppositions of Mars occur approximately 26 months apart so missing a launch window means a delay of over two years.

This science mission from the United Arab Emirates (UAE) — the first by an Arab-Islamic country — will blast-off from Tanegashima Space Center, Japan. The “Hope Probe” seeks to provide a better understanding of the Martian atmosphere and its layers, including the loss of hydrogen and oxygen gases into space over a Martian year.

The Tianwen-1 mission (known as Huoxing-1, HX-1 during development) will be China’s first Mars orbiter, lander and rover. It will deploy an orbiter around Mars and land a rover on the surface on April 23, 2021. Its stated objectives are to search for evidence of both current and past life and to assess the planet’s environment.

The Mars 2020 mission addresses key astrobiology questions about the potential for life on Mars. The Perseverance rover includes a drill that can collect core samples of the most promising rocks and soils and set them aside in a “cache” on the surface of Mars – ready to be returned to Earth in a future mission.

A fourth mission, the ESA’s ExoMars mission, was originally scheduled to launch in 2020. However, the COVID-19 pandemic impacted the timelines for testing vital parachutes & electronics and forced a delay. But since oppositions of Mars happen every 26 months, the launch has been postponed by over two years to 2022.

The once-in-a-decade Comet Neowise is a spectacular sight in the evening skies from Vancouver.

Here are a few tips for finding the comet.

The comet should be a nice sight for the next few weeks and there are some clear evening skies in the forecast so take the opportunity to have a look. Gary Boyle wrote an article in the Georgia Strait with more information & tips. The article includes the image below showing the progress of the comet during July.

The comet is a great target for photography so bring your camera and get some advice on taking your own photos in the article “A Beginner’s Guide To Photographing Comet Neowise “. Vancouver is Awesome has a great collection of photos from around Vancouver.

The comet will dim in absolute brightness as the month progresses because it is moving further away from the Sun. But it is moving higher in the sky and makes its closest approach on July 23rd so the views and contrast might still improve for another week.

Our NOVA Newsletter for July-Aug 2020 is available as a pdf file. An archive of older issues can be found on our Newsletter page. The contents include:

Is the Sun Getting More Active? by J. Karl Miller

Memories of Barry by Scott McGillivray 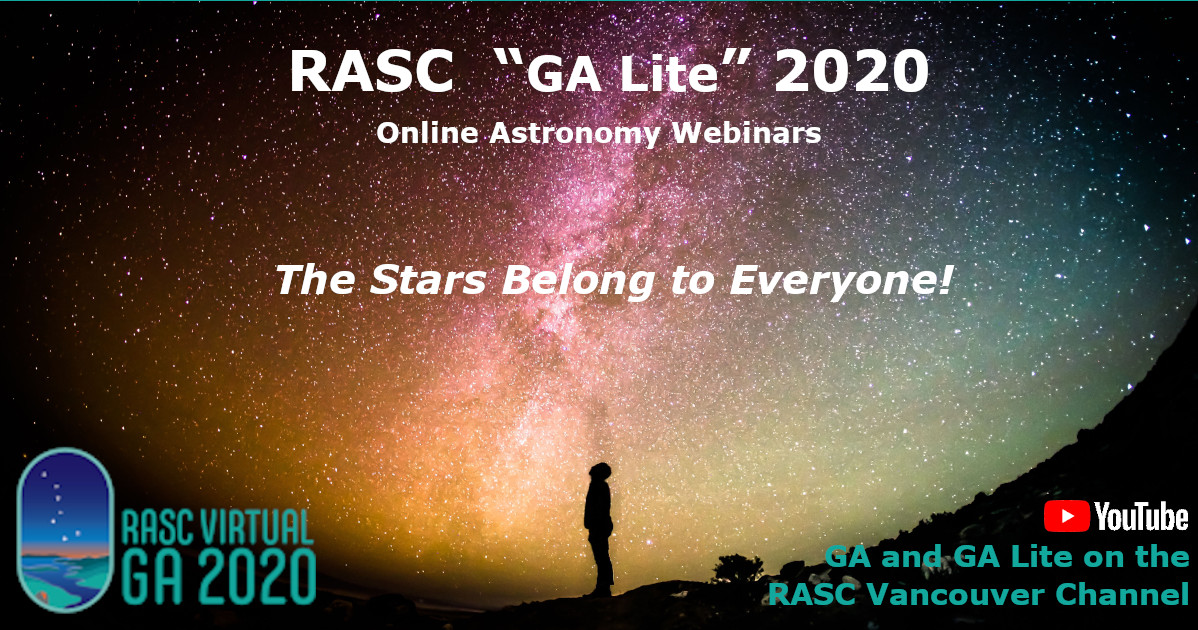 Videos from “GA Lite – Part 1” are there now, others will be uploaded by the end of June or early July. Subscribe to the RASC Vancouver channel to get notifications when new videos are uploaded.

The (Northern) Summer Solstice, today at 2:44 PM PDT, marks the earliest beginning of summer since 1896.

The chart above shows how the quadrennial correction (which the Julian Calendar is solely based on) works well short term, but over a longer period of time (130 years or so), it produces a significant error (one full day). To correct this, the Gregorian Calendar introduces another correction which is to omit leap days in some of the years that centuries begin with (or end, some would say). Years like 1700, 1800, 1900, 2100, 2200, 2300 etc. are chosen for this correction. So, we are in a deep stretch without this centennial correction and the seasons’ start dates will be falling even earlier until late 21st century.

“Don’t miss the opportunity on the night of June 15th to see comet C/2017 T2 (PANSTARRS) in the same FOV as the bright galaxy Messier 109 and the bright star Gamma Ursa Majoris. View it around 11:00pm when it’s dark and still relatively high in the sky. Good luck! “

The good news is that the comet is still close to M109 on the night of Tuesday June 16th, 2020 and the skies are forecasted to be somewhat clear in Vancouver. It is easy to find in the North-Western skies because of its proximity to Phecda – a bright star in the bowl of the Big Dipper. Recent observations have the comet at magnitude 8.5 so it is visible in small telescopes. 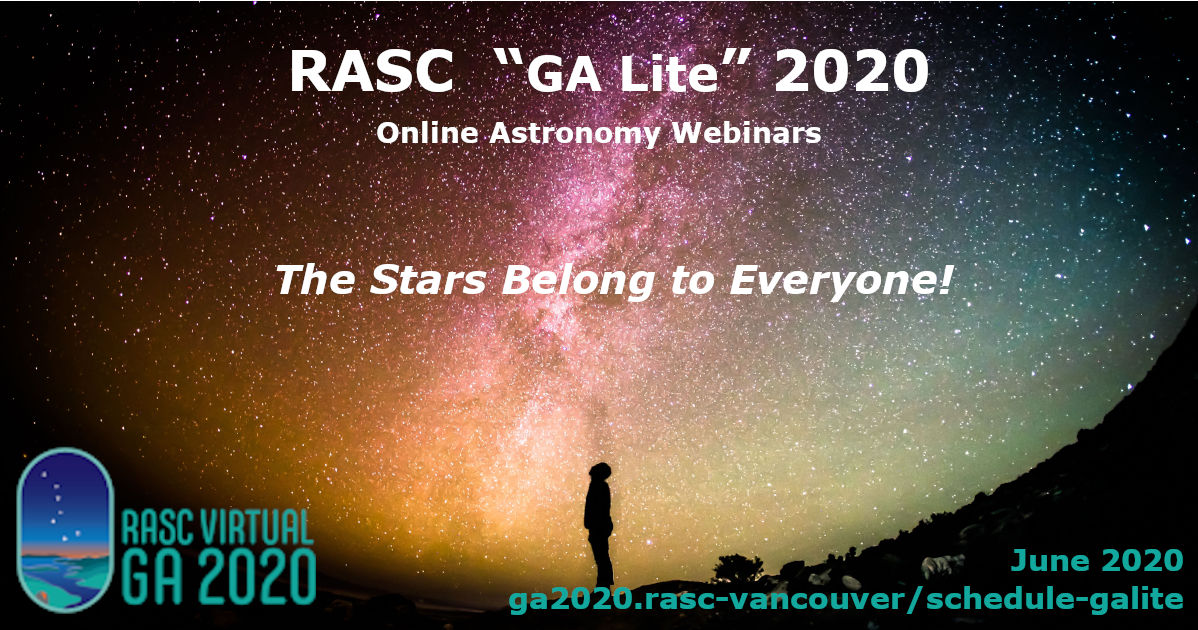 Join us for our “GA Lite” series of astronomy webinars, a great follow-up to the RASC Virtual General Assembly. The series is scheduled over the two weekends June 13&14  and June 20&21, with more details at

The webinars are free, open to the public, and family friendly.

What else are you going to do with this Vancouver weather forecast?

This award is given at the President’s discretion, usually once a year, to a member (or members) who has/have made an important contribution to the Society.

Mr. Shanko served as speaker coordinator for the Vancouver Centre for 31 years and was active in RASC public outreach efforts in the Vancouver area. In his life he had to overcome many economic and health challenges but became known for his ability to attract outstanding speakers from around Canada and the U.S. for Vancouver Centre events. Unfortunately, Mr. Shanko passed away unexpectedly just before his 60th birthday on 2020 May 2.