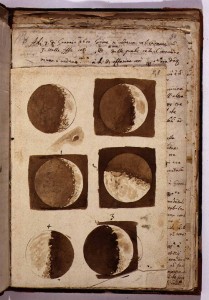 “… it is seen that the Moon is most evidently not at all of an even, smooth and regular surface, as a great many people believe of it and of the other heavenly bodies, but on the contrary it is rough and unequal. In short, it is shown to be such that sane reasoning cannot conclude otherwise than that it is full of prominences and cavities similar, but much larger, to the mountains and valleys spread over the Earth’s surface.”

What was it like? The moon, through a telescope, for the first time. A sight familiar to everyone, yet never really seen.  Astronomy as sense of perspective, as the ultimate “mind’s eye”  for a glimpse beyond ordinary everyday experience.

The International Year of Astronomy 2009 is a global effort initiated by the International Astronomical Union and UNESCO to help the citizens of the world rediscover their place in the Universe through the day- and night-time sky, and thereby engage a personal sense of wonder and discovery. It will be a global celebration of astronomy and its contributions to society and culture, highlighted by the 400th anniversary of the first use of an astronomical telescope by Galileo Galilei.