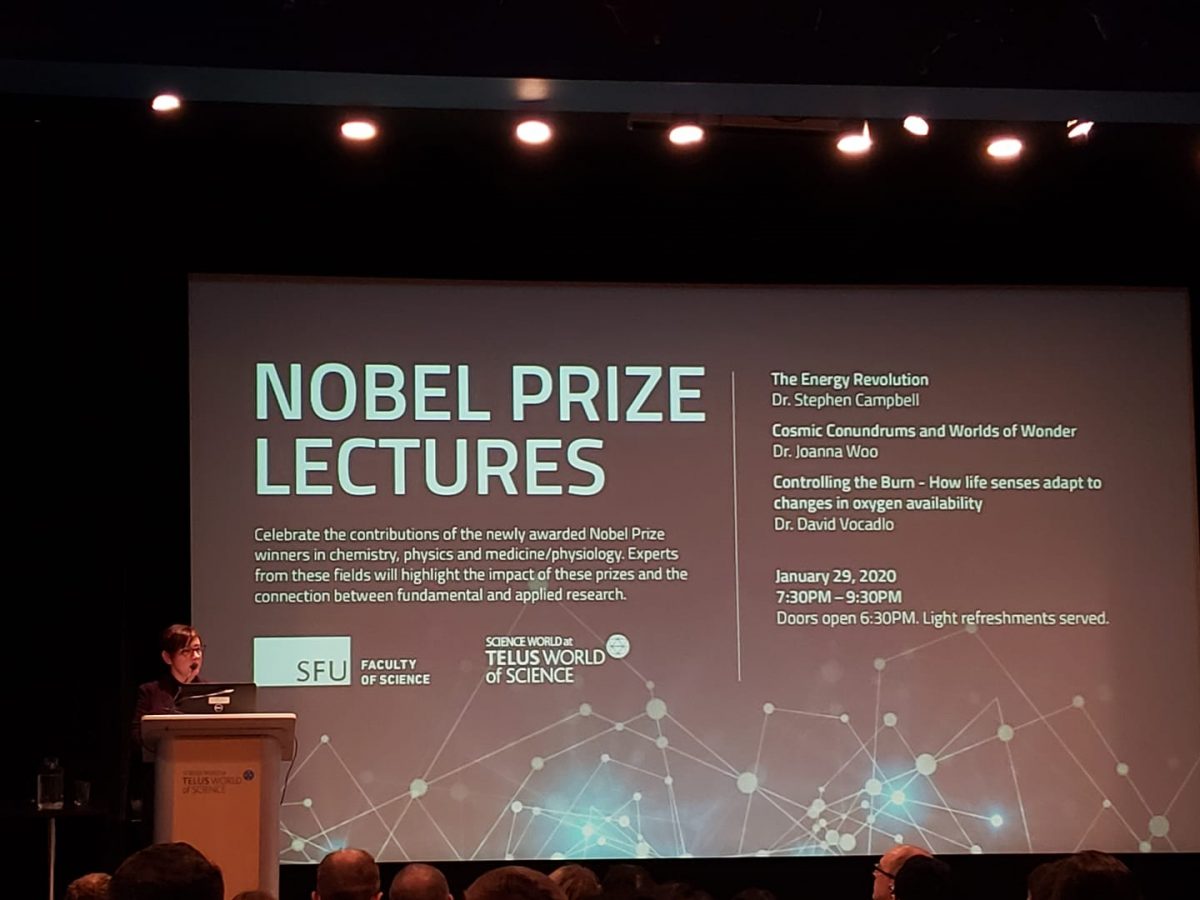 I was feeling a bit guilty not knowing much about James Peebles’ work and the discoveries that led him being awarded 1/2 of the 2019 Nobel Prize in physics. After all, he was born in St. Boniface, Manitoba (now part of Winnipeg) and obtained his undergraduate degree at the University of Manitoba (my Alma Matter). Peebles was awarded the prize for contributions to our understanding of the evolution of the universe and Earth’s place in the cosmos. Peebles is a theoretical cosmologist whose work involves the study of the largest-scale structures and dynamics of the universe with fundamental questions about its origin, structure, evolution, and ultimate fate.

Fortunately, Dr. Joanna Woo presented a great summary of his work at Simon Fraser University’s celebration of the 2019 Nobel prizes at Science World last Wednesday. Dr. Woo is an astrophysicist who has recently joined the faculty at SFU. She is also the new Director of the Trottier Observatory. Her presentation, that described how Peebles’ theoretical work made predictions confirmed by three Nobel prize worthy observational discoveries, really highlighted the significance of Peebles’ theoretical research. The next three sections are my short summary.

Peebles and his colleges developed theoretical models that started at the big bang and ran the clock forward to predict the temperature that the initial background radiation would have cooled to, predicting a present temperature of around 10° K. Penzias and Wilson from Bell labs won the 1978 Nobel Prize for their detection of the CMB at a temperature of about 3.5° K. Although both groups published their results in same issue of Astrophysical Journal Letters, only Penzias and Wilson received the Nobel Prize for the discovery of the CMB.

Fluctuations in the CMB

Peebles realized that the young universe must have had fluctuations in density in order for galaxies, stars, and planets to form. His theoretical models predicted the impact that these fluctuations had on the cosmic microwave background. These predictions were confirmed, with the help of the NASA COBE mission in 1989, with the discovery and measurement of small variations in the CMB temperature in different directions. John C. Mather and George F. Smoot were awarded the 2006 Nobel Prize for these discoveries that confirmed Peebles’ theory

Proportions of Matter, Dark Matter, and Dark Energy in the Univese

Peebles contributed to reviving Einstein’s cosmological constant, which has been renamed to Dark Energy, in models that predicted the composition of the Universe to be 5% ordinary matter, 26% Dark Matter, and 69% Dark Energy. Dark energy remained just a theory for years, until the universe’s accelerating expansion was discovered in 1998, resulting in the 2011 Nobel Prize for Saul Perlmutter, Brian Schmidt and Adam Riess. More recent studies, such as NASA’s Wilkinson Microwave Anistropy Probe and Europe’s Planck spacecraft have refined the proportions and led David Spergel, a cosmologist who worked on these missions, to remark “Jim Peebles is right”!

Other Half of the 2019 Nobel Prize in Physics

The other 1/2 of the 2019 Nobel went to Michel Mayor and Didier Queloz for the discovery of the first exoplanet orbiting a solar-type star. They discovered the exoplanet 51 Pegasi b using the radial velocity method.  This method, also known as Doppler spectroscopy, measures a star’s wobble velocity which can be evidence for an orbiting planet. Another Canadian connection here is that the radial velocity method was pioneered by G. Walker, B. Campbell and S. Yang from the University of British Columbia. The star 51 Pegasi is a solar-like star but the exoplanet is not Earth-like. It is more like a small Jupiter that orbits its star about every four days and is much closer to its star than Mercury is to the Sun

Looking forward to next year’s celebration.